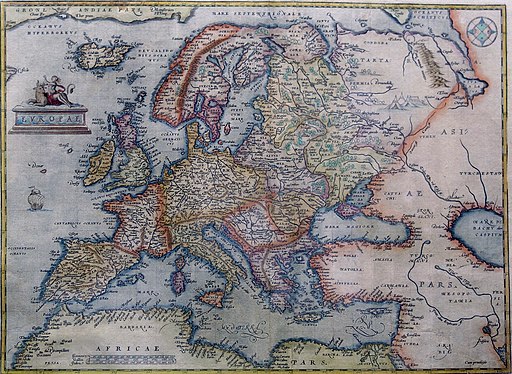 Europe 4,500BCE The transition from the Mesolithic to the Neolithic way of life was a turning point in humankind's social & economic development comparable in importance to the industrial and scientific revolutions of the nineteenth & twentieth centuries.
The contrast between a temporary Mesolithic camp and a village of Neolithic farmers is certainly striking enough to justify the term 'Neolithic revolution', but just as modern technology makes its most dramatic appearance in countries with low technology, so the Neolithic was at its most 'revolutionary' when, in its fully developed form, it spread beyond the Near-Eastern area where it had evolved into Mesolithic Europe, Africa & Asia.
The innovations of the Neolithic are many, the cultivation of wheat & barley, the domestication of goats, sheep, pigs & cattle, the used of fired pottery and polished stone tools, opposed to the Mesolithic chipped flints. The pre-pottery early period of Neolithic times, archaeologists found their settlements were largely in fertile crescents, that could be easily irrigated, always close to a water supply.
The 'incipient agriculture region' of where Turkey is today, archaeologists discovered a walled hamlet covering some ten acres whose inhabitants planted corn and kept domesticated goats. Apart from the fortification, which implies a level of social organisation, the diggers of this excavation called it 'the missing link' which falls easily into place within the Near Eastern evolutionary sequence.
Reference used : Ancient Europe : by Colin McEvedy By the 6th millennium the fully evolved Neolithic had spread from the fertile crescents across Anatolia to the Balkans, at the same time of evolution, the original Neolithic communities of the Near East passed into the cultural phase known as Chalcolithic meaning 'copper but still stone-using' -  although some archaeologists prefer the expression of 'The Bronze Age'.
However, in the Chalcolithic period, the metal copper dominated the early metal-working technology of the Near East, adding tin to the copper to produce Bronze, a harder and stronger metal, the site of Belovode on the Mountain of Rudnik in Serbia has the oldest securely-dated evidence of copper-smelting, from 5,000BCE.
Three major cultural zones the entered The Copper Age before any other community, are Halafian, of Syria, & Northern Mesopotamia, the Ghassulian of Palestine & the Hacilar, of Anatolia. Copper working remained confined to the Near East for 2,000 years after its discovery and during most of this period of the 6th & 5th millennia, - the line marking the limit of the Neolithic techniques seems to have been quite static.
By 4,000BCE there were two breakthroughs, one from Palestine to Egypt and the North African Coast, and another from the Lower Danube region across Central Europe. In the case of Lower Danube, the reason for their sudden rapid progress is easy to discern, - they cleared their fields by burning the cover off the virgin lands and tilled these new clearances, that gave them several seasons of high yield.
The people of the Lower Danube, though they were Neolithic, were far more mobile than other Mesolithic populations of the Baltic & Iberian coastlines, that were sufficiently supplied with a diet of shellfish.
The 'Ertebolle' peoples of today's Denmark and various other Mesolithic groups on the Eastern Borders of the New Neolithic zones learnt from the people of the Lower Danube, to make pottery and how to polish the stone tools, but kept the food-gathering traditions rather than turning their hands to farming methods.
Reference used : Colin McEvedy @beric wrote this BTW